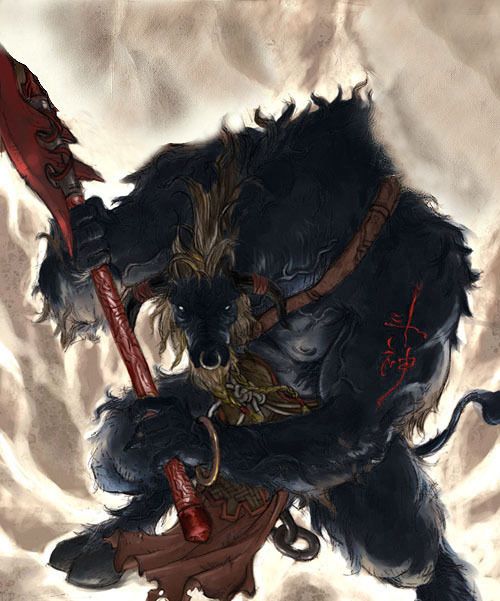 Bio: Nobru is the standing champion of the Gore-Horn Arena in Sorghun Graywall. Since the city's construction, the ebony minotaur has been fighting in bloodstone arenas.

Nobru hails from a small herd that inhabit the ruins of a Dhakaani shrine in the wilds of Droaam. Keeping to themselves in the labyrinthine halls of the once-proud sanctum, Nobru tested his mettle against his siblings and the foul things that would on ocassion crawl up from the darkness below. The warrior honed his axe on creatures he did not comprehend- loathsome four-armed small pests, and goblin warriors who refused the burden of the grave.

Simple-minded, Nobru lived only for battle and the next chance to prove himself the superior of his older brothers- until the ogres. A trio of giants tainted by fire and darkness came howling into the shrine, froth upon their lips and bloodied crude clubs held in their hands. Dawn found Nobru unconscious and bleeding out, the sole survivor of the slaughter. Awakened by a strange glow, the minotaur found his wounds knitting back together and a blind cow kneeling over him. Introducing herself as his grandmother, Maeve congratulated the warrior on his prowess. Producing a branding iron, the metal suddenly glowed red-hot and Maeve marked Nobru as her champion.

Knowing no other purpose or family, Nobru fights in the Gore-horn, bringing wealth and prestige to his matron to which he is fiercely loyal. Nobru has rarely known defeat, and comprehends little of life outside of battle. Maeve has promised Nobru his choice from any harem of any minotaur he defeats, and as such Nobru shows no mercy in the arena against his own kind. He knows that the axe gifted to him by Maeve is better than normal and has been told it is magic.

Nobru has one fear- he has reason to think that Maeve has brought him back from death at least three times, and he fears the time when he fails his grandmother and she will not grant him another chance to keep fighting.