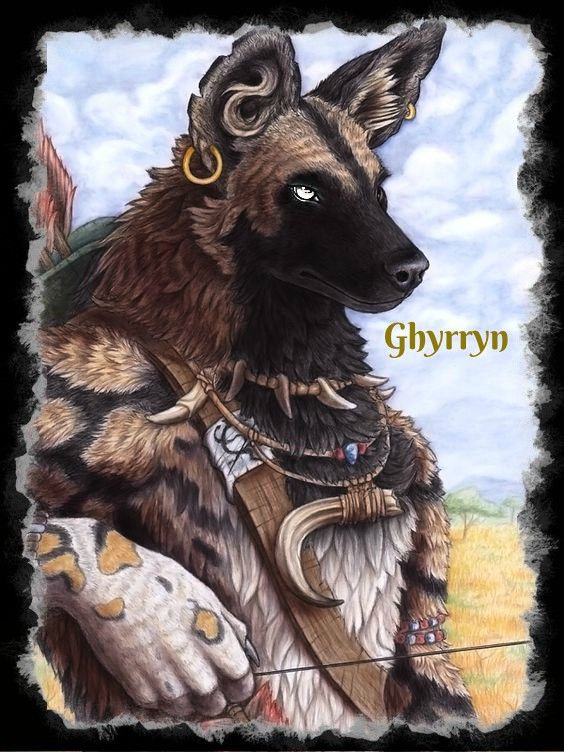 Bio: Ghyryyn is a hunter of the Znir Pact. His clan has forgone their individual totem, preferring to only be known as part of the Znir.

With his mighty darkwood bow, Ghyryyn takes down foe after foe, preferring to cull those humans foolish enough to venture alone into the wilds of Droaam. During his childhood, the gnoll was on a hunt with his older siblings. The three of them, and their hyena companions, were hunting herd animals across the lowlands to bring home to their pack. As they roasted a portion of their kill that evening, they were attacked- ambushed by a traveling caravan of humans. Ghyryyn's older sister Knazhear was ran through by their swords before she could even cry out for help. The trespassers then turned on Ghyryyn and his litter mate Trorrorg. Instead of granting swift ends, the humans wanted to play with their younger prey, pulling their swings so the bite of the sword would cut but not kill. Trorrorg lost an arm, but managed to end two of the soft skinned attackers. A vicious slash cost Ghyryyn his eye, and almost his life before he took up his sister's massive bow- longer at the time then he was tall. With the last of his strength, the pup drew back an arrow, aiming through the blood staining his vision, and let his vengeance fly. His revenge pierced one human completely and lodged itself into another behind him.

With two dead by Trorrorg, two more by Ghyryyn's single arrow, and another torn apart by the hyenas, the last traveler fled from the scene in a panic. The hyenas gave chase, but the two gnoll hunters were too wounded to assist. The murderer escaped into the dark of the night.

Ghyryyn spent the next several seasons honing his skills with the greatbow he inherited from Knazhear, taking any opportunity the Znir would give him to use it against any human foolish enough to travel without safe passage. Ghyryyn would accept tasks on behalf of the Znir Pact that took him all across the plains and hills of his territory. Others would hire him as a guide or escort. Ghyryyn would accept payment for these treks, but would only use those resources to improve his ability to hunt his hated foe.

When possible, Ghyryyn hunted only with his hyenas, not accepting help of other pack gnolls if he could avoid it- never wanting to put their lives in danger when facing the callous humans who kill for sport and merriment.

In 998, the party hired Ghyryyn out of Graywall to escort them to the Temple of Kago-ken Guursh Dhakaan. After completing this task, that winter Ghyryyn was approached by a small witch of the scaled people, who spent many evenings telling him of the stories of the stars and his place in a greater pack. Sarazra beseeched his aid in protecting another scaly kind so that his destiny could unfold. Ghyryyn agreed, eager for once to see the world beyond his own hunting grounds. Taking his loyal hyenas he followed the witch South, to meet this scaly kind of legend, and to study humans in one of their own dens.

During the summer of 999, the party met Ghyryyn again, still employed with his new pack- Sarazra the lizardfolk, the kobold called Zanadu, and a wild human from the lands of the dragons (surprisingly the only human Ghyryyn has ever tolerated). On behalf of Sora Katra, the crew of the Dragon's Dream ferried the party (in raven form) across the Thunder Sea to the lost continent of Xen'drik.