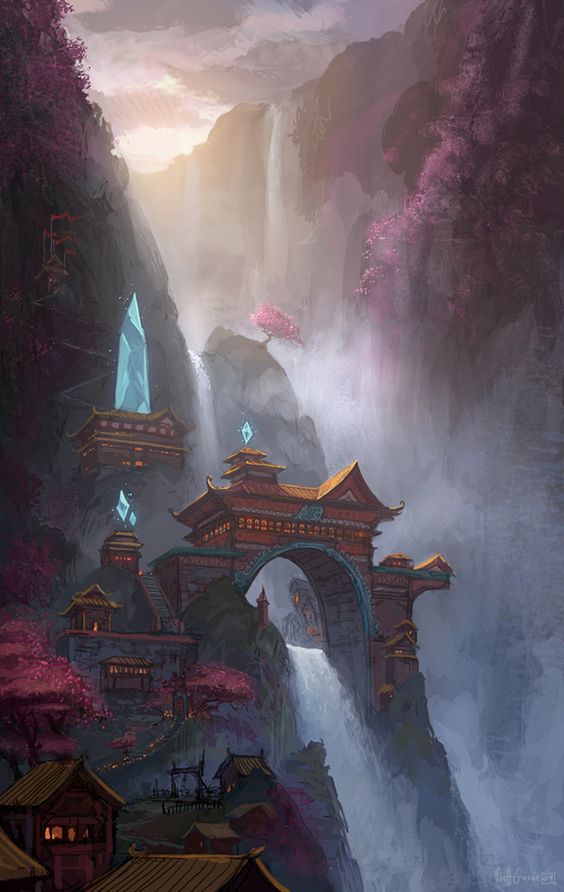 In the heights of the Byeshk Mountains, where  Droaam and the Eldeen Reaches touch, there is a sanctuary hidden in the peaks by a heavy bank of fog and ancient spells. The Stowald Auchtirian is an enclave inhabited mostly by samsarans, a place for them to take refuge from the world and to contemplate the deep mysterious set into motion by the Progenitors. The monastery  sits within a nexus  of manifest zones to the Twilight Forest and the Eternal Day, and the Auchtirian monks have utilized these rare blends of planar magics to their benefits. The ravages of time are delayed here; food keeps longer without spoiling, new life takes longer to mature- preserved in the innocence of youth, even the dead here are granted respite from decay.

Although kept secluded from most of the world, the Stowald remains a safe haven for any samsaran , who have a natural inclination for finding the monastery. Wayward travelers are not turned away, but few make it to the heights of the Pass due to the harsh weather conditions and fierce wyvern predators that claim the Byeshk Mountains for their nesting grounds.

In 999 YK, the party was brought to the Stowald Auchtirian by riding a lightning storm with the revered leaders of the Gatekeeper Druids. Granted amnesty by the eldest monk of the monastery- the Guru Ram Baba, the unlikely family was able to obtain relaxation they had not previously known. Alarin was welcomed into the monastery and learned much of his people. Ram Baba gifted the magus with an Irian crystal- set into his wayfinder it would always allow the samsaran to return.

Worry was lifted from the new parents' shoulders as the monks offered to help tutor and look after their children. The Guru told the party that the months of their absence would not weigh so heavily upon the children as the magics of the Stowald Auchtirian would stretch their youthful days.

The party was granted an audience by two powerful oracles, a pair of mighty and enigmatic sphinxes- Flamewind and Tale-of-Woe. Much was learned by the scholarly felines, and Alarin was given new insight into his past lives.

After a few weeks of respite, the council of elder monks beseeched the party's aid in the disappearance of Bakji Cooper; a former member of their enclave who had moved out into the world of men.