Clever unlikely hero with a hidden heart of gold.

Rek’sit was born to a goblin couple living near the newly founded capital of Rhukaan Draal. The goblins had lived quietly during most of the Last War as merchants to the then Cyran frontier town. With the Lhesh Haruuc’s rebellion, a nation was carved for the goblin people and many things changed. Not all goblins accepted the rule of the Lhesh, however, and once peaceful clans and towns were brought to strife. A rogue band of Marguul set upon Rek’sit’s birth village like heavy clouds on a rainy day bringing death and ruin. The goblin couple with their newborn son, feared for their lives. The merchant took up a simple cudgel, urging his wife to flee with their son. Shillelagh in hand, the merchant exited their home as the slavers came. Sekrit climbed out of the window, her son carried in a basket, and made her way to the Ghaal River- knowing that sending her son down river was the only sure way for him to have a chance of escaping his parents’ fate.

Days later, Rek’sit was found by a weary aged Golin’dar named Daxus. Weak and close to death, Rek’sit was brought to the house of Wildebrant Solorice Trerkais excoriate of House Deneith. The wine merchant master of Daxus allowed the goblin-child to be brought into the home under Daxus’ watch. The withered butler’s spark for life was renewed in caring for the golin’gaa, and Daxus cared for Rek’sit as one of his own. Daxus tutored the growing child in the ways of the household, teaching him the language and customs of the dar as well as humans, many of Rek’sit’s customs and habits were patched from both worlds.

As time passed, Rek’sit grew weary of his master’s ill temper and will towards his servants. The vintner was cruel and served only himself, letting slip on his most inebriated nights that his pledge of fealty to the nation of Darguun was merely lip service. Falling ever further from favor with his dragonmarked house, Master Trerkais became a surly (and abusive) drunkard. Rek’sit’s adoptive father became the unfortunate target of the merchant’s ire when a wine shipment was lost, and the backhanded blow unhindered by inebriation brought the loyal servant low. Wracked with grief, a plan formed in Rek’sit’s mind, and the goblin seethed as he bid his time. Then one fated evening not long after, his master called him once more to taste for poisons in the evening’s cocktail, Rek’sit slipped a compound of enmity into the vintner’s drink after tasting the liquor.

As Wildebrandt choked on his libations, the goblin stepped over him, fleeing the home with only the clothes on his back (and a small assortment of silver trinkets to buy a new life). Rek’sit slipped away into the umbra a changed goblin. Meek no longer, he discarded his old life like a snake shedding its skin. He chose a name to match the malice growing in his heart, an homage to the act that freed his body and spirit. Rek’sit, now Raxys Blightdrinker, set off to the seawall mountains to seek a new life for himself. Hearing many tales of the city of towers, he headed for Sharn.

As fate would have it however, Raxys never made it to Sharn. He faced many hardships and even found his faith in his ever winding path, but just before his prize could be reached, he was pulled into a new tale by a 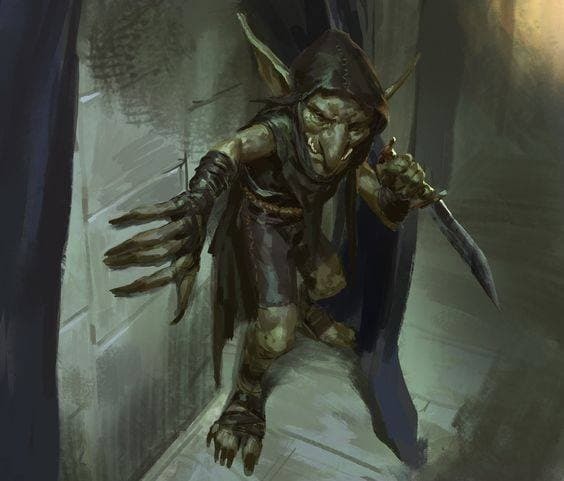